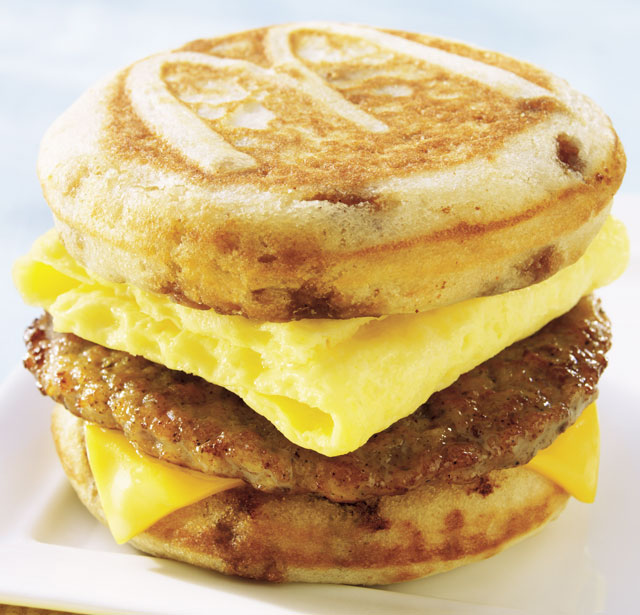 If I only had 6 months left to live, I’d be eating a McGriddle every morning until I kicked the bucket. The draw back, of course, would be that I’d have to get up before 11 a.m. (why doesn’t McDonald’s have all-day breakfast?), but I’m learning that it’s a lot easier to get up before noon if you go to bed before 2 a.m. The wife doesn’t let me stay up late anymore. 🙁 Anyway, the point I’m trying to make is that the McGriddle breakfast sandwich from McDonald’s is amazing, and the reason I don’t eat one everyday is because I’d like to live past the age of 30.

For some of you folks who haven’t tried the wonderful yet potentially deadly McGriddle because either you don’t get up that early or you don’t want to die that early, a McGriddle consists of the following:

The damage to your body aside, I think there’s an important question we should be asking… why don’t they offer a McGriddle with bacon and sausage?

The McGriddle is a remarkable product of McDonald’s heart attack engineering. I love having all of my favourite breakfast foods wrapped up in a single package. It’s a beautiful thing.

I never used to be a fan of McDonald’s breakfast, but I’ve come to appreciate the extra artificial flavour McDonald’s premade frozen ingredients give to the already unhealthy foods.

The McGriddle will never replace my Hungry Man breakfast at Madelyn’s Diner in Stratford, Ontario (2 eggs, farmer’s sausage, fried potatoes, 2 pancakes with toast and coffee for around $9). But it sure gives me an incentive to go out shopping with my wife on Saturday mornings.

Don’t get me wrong, I love the McGriddle. I also realize how horrible it is for you. Should I never eat one then? No. I just won’t have one everyday.