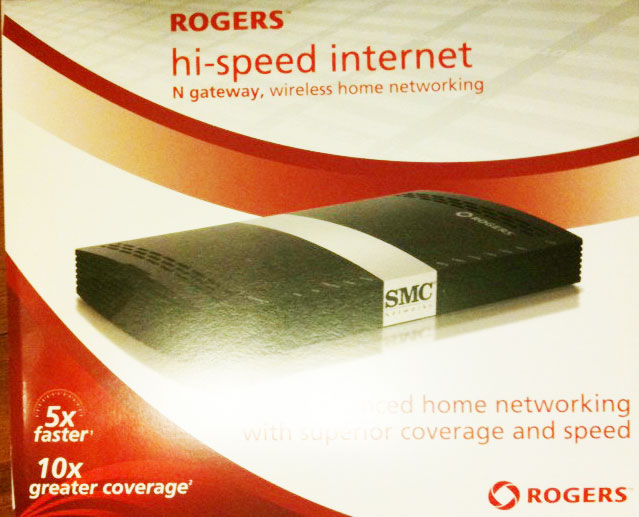 When I lived in Hamilton, I used Mountain Cable (now Shaw) as my Internet Service Provider. The service was excellent, very fast and there were no usage limits. I could download hundreds of gigabytes per month and no one cared. I have since moved to Kitchener and been forced to be introduced to the wonderful world of Rogers. I should note that I dislike Bell and anything Bell-related, and that I’ve never had a positive experience with DSL. So Rogers high speed it was.

I signed up for the Rogers Extreme plan which includes 10 Mbps down, 1 Mbps up, and 95 GB of usage. I was a little concerned about the internet usage limit, but I wasn’t worried because I also noticed that additional usage was billed at $1.50/GB to a maximum of $25. $25 more for unlimited internet? Sounds good. I generally was under the 95 GB mark, but if I went over I made sure I went way over to justify the extra charge.

Unfortunately, at some point without my knowing it, Rogers increased the maximum additional usage charge to $50, which means my total internet bill could be over $110. That’s too high for me. I noticed Rogers had 2 more faster plans available: Extreme Plus for $69 (25 Mbps/1 Mbps/125GB) and Ultimate for $99 (50 Mbps/2 Mbps/175 GB). I figured I would just upgrade to the Extreme Plus and pay $10 for an extra 30 GB–that should be enough, I thought. I phoned up Rogers and upgraded my plan. I was a little unhappy that I was told I would need a new modem to take advantage of the faster speed, but I was more concerned with the extra $7 per month I’d have to pay just to rent the thing. Also, the new modem was actually a Wireless N gateway. That’s nice, but I already have a wireless N access point and use pfSense as my router/firewall. I was not impressed, but I figured the exta GB and 25 Mbps down were worth the inconvenience.

The swapping of the modem

The next day, I went to the Rogers store and swapped my modem. I also decided that I would purchase the new modem instead of renting–it would be paid for after 28 months of paying $7. I took my new modem home and set it up. The first thing I did was log in using the mso credentials to disable the gateway nonsense. I’m very glad they let me do that, although it’s a waste because I just paid $199 for features I’ll never use. It was really easy to set up. Once the gateway features were disabled, pfSense was able to get my public IP from the modem instead of the 192.168.0.10 address it had previously been assigned. I then excitedly went to speedtest.net and ran a speed test (see below).

…hmm, that’s nice, I thought, but I’m paying for 25 Mbps. I ran it again, and again, and then tried the official Rogers speed test, plus a bunch of other ISP speed tests and even thespeedtest app on my iPhone. Each showed very similar results. None would go over the 10 Mbps barrier. I knew it was incredibly unlikely that a busy network would give me these consistent results and I knew that being so close to 10 Mbps couldn’t just have been a coincidence, so I called technical support. I actually was going to use the live chat technical support, but when I read the disclaimer about closing windows on your computer that you didn’t want the tech support guy to see, I immediately picked up the phone. I’m probably more qualified than most of the tech support at Rogers, so there’s not a chance I’d let some newbie touch my precious Mac–assuming they even support Macs.

I had to resort to calling tech support

Tech support was helpful and figured out my problem right away. The genius that upgraded my account the day before hadn’t checked properly to see if the DOCSIS 3 was installed in my area yet. It wasn’t. The tech support guy said it should be coming in a few months but couldn’t promise anything. Wonderful. I asked the tech guy if I could keep the Extreme Plus on the old speed, but with the increased usage limit of 125 GB. He said that I could not officially be switched to the new plan until DOCSIS was in my area, so I was stuck with my 95 GB limit. Although I was unhappy about this, the tech support guy was nice and friendly and answered all my questions fully. He then transferred me to customer service so I could downgrade my account.

I must say the customer service representative I spoke to was one of the best customer service folk I’ve ever encountered. She was very friendly and helpful, and instead of the typical silence one experiences while the representative types away on a computer, she told me exactly what she was doing and why. I greatly appreciated her friendly approach. To compensate me for my inconvenience, Rogers gave me a $5 goodwill credit–which will barely dent my additional usage fees for the month, but it’s better than nothing. Anyway, I’m on the right plan now and will probably try upgrading to Extreme Plus again when it’s available in my area. Apparently I’ll know when that happens because I will be “bombarded with marketing” according to my friendly Rogers customer service representative. I don’t doubt it.

Overall, I am happy with my Rogers service. It’s always super fast (even at 10 Mbps), my 3rd party VOIP works perfectly, and I’ve always had a good experience with Rogers customer service. I just wish the sales guys would not sell services to customers that they can’t use. Oh, and it would be great if Rogers offered a cheap DOCSIS 3 compatible modem with no gateway functions.